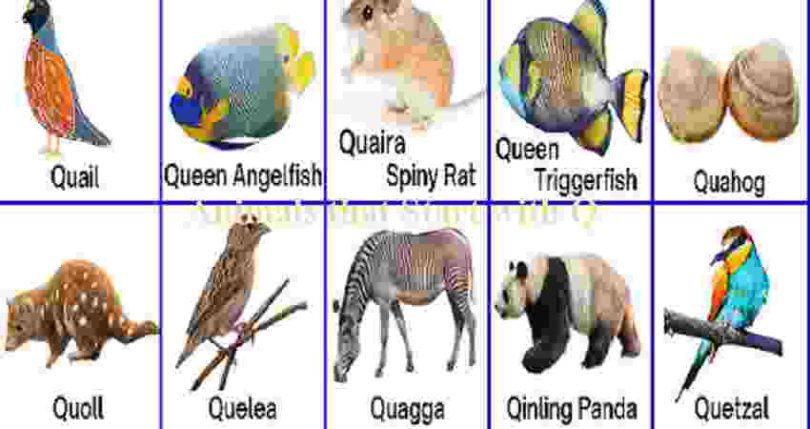 Name of Animals Starting with Q

Below you’ll find an alphabetical list of animals that start with q. These animals are found all over the world, which is one of the many things that make each animal so unique.

Each animal will have an interesting fact to go with it so that you can better understand their diverse habits, sizes, characteristics, origins, and so much more.

Name of animals starting with q

No.-1.Qinling Panda: -There are estimated to be between 200 and 300 left living in the wild. They have an identical diet, habitat, and behavior to the giant panda.

No.-1.Quagga: -This zebra has gone extinct. It was native to dry grassy plains in southern Africa. This animal also looked more like a horse than a zebra.

No.-1.Quahog: -This very big deepwater clam was designated as the Official Shell of Rhode Island in 1987.

No.-1.Quail: -These small birds belong to the pheasant and partridge species. Even though they have long pointed wings, they are able to fly short distances.

No.-1.Quaira Spiny Rat: -A group of these rats is called a ‘colony, horde, pack, plague, or swarm’.

No.-1.Quechuan Hocicudo: -A species of rodent that originates from South America. The only place that it’s found is in a small region of the Andes in central Bolivia.

No.-1.Queen Angelfish: -They are named after the blue-ringed black spot on their heads that resembles a crown. They are capable of digesting the tough flesh of sponges.

No.-1.Queen of Sheba’s Gazelle: -Also known as the Yemen Gazelle is an extinct species of gazelle.

No.-1.Queen Snake: -Known for hanging in branches over streams. They will often drop into water when threatened or disturbed, however, this snake is harmless to humans.

No.-1.Queen Snapper: -This fish is bright red on its upper and lower sides with large and yellow eyes. The average size of a queen snapper is 21 inches. Their common habitat is offshore over rocky reefs of the continental shelf.

Name of animals starting with q:-

No.-1.Queen Triggerfish: -A tropical Atlantic fish is large, oval-shaped, has small eyes, and is laterally-compressed.

No.-1.Queensland Grouper: -This fish is one of the world’s largest bony fish, with mature adults weighing up to 882 pounds and being around 8.9 feet in length. They have at least seven rows of teeth in the middle of their lower jaw. This fish is found throughout the Indo-Pacific region.

No.-1.Queensland Tube-Nosed Bat: -These creatures are found in Australia. They get their name from their raised tubular nostrils.

No.-1.Quelea: -There are more of this bird species than any other bird species in the world. They are more than 1.5 billion, with single colonies having up to 30 million.

Animals that Start with Q:-

No.-1.Quokka: -Also known as the short-tailed scrub wallaby. These creatures get around like kangaroos and are the size of a domestic cat.

No.-1.Quoll: -These carnivorous marsupials are native to Australia and New Guinea. They spend most of their day in a den.