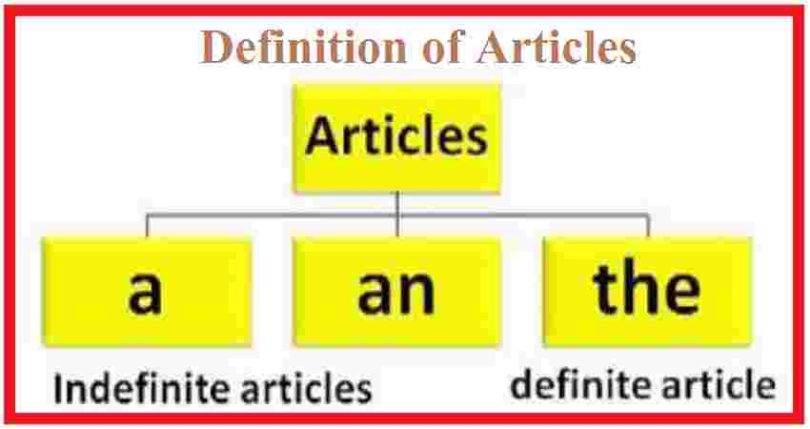 In the previous post we have read in detail about “Common Verbs in English”.

Learn how to use articles – a, an, the in English with useful grammar rules and example sentences. When studying English grammar, you may have come across the article.

What Is An Article?

An article is a word that comes before a noun to show if it’s specific or general.

In English grammar, there are two different types of article, the definite article and the indefinite article. In the most simple terms an article is a way of letting the listener or speaker know that a noun is either unspecific or specific.

During the long journey, the family played car games.

During a long journey, a family can play car games.

Simply by changing the article, we have made the sentence a more general statement and not about a specific thing or person.

No.-1. Articles are small but important words in the English language.

No.-2. Articles are considered adjectives because they modify or help describe nouns.

No.-3. Articles always come before or precede the nouns they describe.

No.-4. There are only three articles in English: a, an and the.

There are two types of articles indefinite ‘a’ and ‘an‘ or definite ‘the’. You also need to know when not to use an article.

In many languages, articles are a special part of speech which cannot be easily combined with other parts of speech.

The best way to remember what a definite article is, is to remember that the word ‘the’ is the definite article. As we have briefly seen in our earlier examples, the word the can be used to demonstrate that the speaker is referring to something specific and not talking in a general sense.

No.-3. Are we going to watch the football game?

No.-4. I need the long wire, it is the only wire which will reach the plug socket.

If the noun begins with a vowel, you should use ‘an.’

If the nouns begins with a consonant, you should use ‘a.’

We use the indefinite article as a way of demonstrating that we are not referring to a specific item or person but rather talking a more general sense.

Example of articles in grammar

No.-3. There is an animal in the garden.

No.-4. Sally has an invention she is working on.

No.-5. How to Use Articles in English Grammar? (A An The)

Rules For Using An Article:-

Rule.-1. We mentioned that depending on whether the noun begins with a consonant or a vowel will depend on which form of the indefinite article you will use, however like many times in the English language, there are some exceptions to this rule.

No.-1. The best example of this is with the word ‘honour’ which begins with a consonant, however this letter is not pronounced so you would not use the word ‘a’ in this instance, you would say:

No.-3. The same rule applies when a word begins with a vowel which is pronounced as though it were a consonant. An example of this would be:

No.-4. He is an United Nations representative.

Rule.-2. If you are using a noun which has been modified by an adjective, then the article should come before the adjective and should correspond to the adjective rather than the noun.

No.-1. The noun ‘igloo’ would usually take the article ‘an’ however if you wanted to describe it as being large, you would create a sentence as follows:

No.-2. The inuit people traditionally lived in a large igloo.

No.-3. Book which would usually take the article ‘a’ however if you wanted to describe the book as being amazing, then you would create a sentence as follows:

No.-4. Last week I read an amazing book.

Rule.-3. When you are using an uncountable noun (this is a noun which cannot be counted or is infinite or intangible.

Examples of these might be sand, wine, soda, air, information etc) you should never use the indefinite article. The reason for this is that this form of article is only used for singular nouns.

If you were to say the following sentence, it would not make any sense.

Please give the dog a water.

Because the noun is uncountable, the use of the indefinite article does not sound correct, however if you were to use the definite article, this would not make sense either as you would be asking for a specific thing, consider the following sentence:

Please give the dog the water.

Unless there is a specific bowl of water waiting to be given to the dog, this sentence would not be correct. If you wish to refer to an uncountable noun in this way, the correct sentence would be as follows:

Please give the dog some water.

Rule.-4. If you are using an article with a possessive pronoun, the rules change once again. In actual fact, the use of these two together does not make much sense. Look at the following sentence:

Have you got the my coat?

This is not correct as you cannot use an article with a possessive pronoun, therefore the article should be omitted.

Rule.-5. There may be times where an article can be left out, as it is not necessary to refer to the noun. A good example of this would be the sentence ‘I like to play football.’ Whilst football is a noun, using the before it would be unnecessary and so the article is not included.

No.-1. Indefinite Articles A and An:-

What is Definition of Indefinite Article?

The words a and an are called indefinite articles. We can use them with singular nouns to talk about any single person or thing.

Deciding which indefinite article to place in front of a word depends upon the initial sound of the word, not the first letter of the word.

‘A’ is used before words beginning with a consonant sound.

The article ‘an’ should be placed before words that begin with a vowel sound.

An hour, an elephant, an actor, an ice-cream.

What is Definition of Definite Article?

The Definite Article ‘THE‘ generally specifies and identifies. It answers the question: ‘Which one?’ Is specifies a person, place, or thing already mentioned.

When an English Article Not to Use :-

No.-1. We usually use no article to talk about things in general.

No.-2. We do not use an article when talking about sports and games.

No.-3. Do not use article before the names of countries unless the name suggests that the country is made up of smaller units or constituent parts.

No.-4. Do not use article before the name of language.

No.-5. Do not use article before the names of railway stations when they are also place names.

No.-6. Do not use article before the names of meals if they refer to the meals generally, as a part of the daily routine.

No.-7. Do not use article before noun + number.

No.-3. Articles with Countable and Uncountable Nouns:-

Countable nouns are individual objects, people, places, etc. which can be counted.

Uncountable nouns are materials, concepts, information, etc. which are not individual objects and can not be counted.